What Does Elope Mean?

If you were to ask your parents what the definition of “elope” means, they might tell you something about running away to get married in secret – possibly with the words “Vegas” or “courthouse” thrown in for flavor. While eloping always seems to have an air of mystery surrounding it, the connection to the phrases “running away” and “secret” are becoming less and less applicable.

What does elope mean?

According to the Oxford English Dictionary, the earliest use of the word “elope” was in the 14th century, where the root of the word “aloper” meant, “leap.” But by the 17th century, the term elope held a very specific definition: “To run away from her husband in the company of a paramour.” While its history may sound scandalous, eloping nowadays is hardly shocking. If anything, it’s becoming more and more common for modern couples.

According to the Oxford English Dictionary, the earliest use of the word “elope” was in the 14th century, where the root of the word “aloper” meant, “leap.” But by the 17th century, the term elope held a very specific definition: “To run away from her husband in the company of a paramour.” While its history may sound scandalous, eloping nowadays is hardly shocking. If anything, it’s becoming more and more common for modern couples.

So, as history progressed, so did the idea of eloping. During the Great Depression, eloping grew popular because the resources to throw a wedding were seemingly nonexistent for most. Elopements were practical, and that’s how they got their reputation for being a cost-saving alternative to the traditional wedding. But elopements still weren’t favored in the social eye, despite their popularity and potential. During this time, elopements ceremonies were being performed solely out of necessity, not choice. 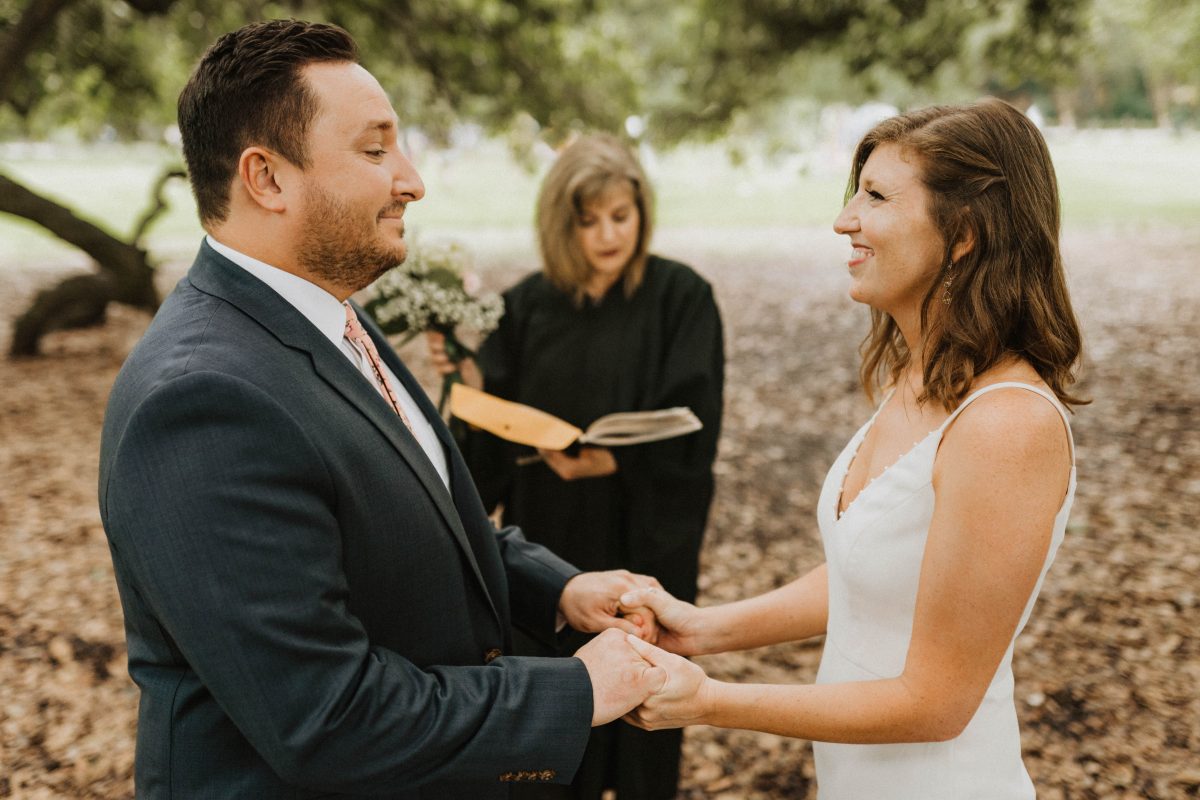 So, exactly what does elope mean, and how do we define “elope”? Thankfully, the definition of eloping has evolved into something new and it’s making a come-back. In fact, it’s almost synonymous with “destination wedding.” If you were to ask a friend what eloping meant, they may tell you that it’s a celebration of love between two people, that often requires a fraction of the planning and budget of a traditional wedding. But eloping doesn’t sacrifice the feeling of love and celebration that some in the past would dictate it must.

The origins of elopement paint the term to be something last-minute, mostly in private or in secret. Fortunately, those preconceived notions have changed dramatically. Some benefits of eloping include less stress, less urgency, and less expenses, which can’t always be said for a traditional wedding. Others may want to have a private ceremony due to personal reasons; They’ve dreamed of marrying somewhere alone on a mountaintop; they don’t want to fuss over the details of a reception; they simply can’t justify the expenses that often come with a large guest list. Whatever the reason, it’s becoming more acceptable to step away from the cookie-cutter celebration and choose something that’s unique to your relationship.

It’s difficult to remember the deeper meaning of a wedding when you’re stressed out, spending thousands, coordinating flowers, music, and decorations. The meaning gets lost. When you simplify your ceremony you allow space to remember what makes getting married so special; the love between you and your partner. It’s a call to action to get back to the basics but, feel free to leave all that shame and guilt in the past where it belongs! Elopement ceremonies stand as a reminder that love and marriage don’t need a thousand dollar price tags. They just need people to cherish them.

What are some elope synonyms?

The definition of eloping is far from black-and-white, and there are many phrases that are synonymous with the word. For instance, phrases like intimate weddings, micro wedding, pop up wedding, and even destination wedding can at times be used interchangeably. At the end of the day, it’s less about sticking to the rules of the origin of the word, and more about what you feel best represents your wedding day.

Article written by Tori Ward
Victoria Ward is a writer at Simply Eloped as well as a Keats Marginalia scholar and Storyfort finalist for her fiction and creative nonfiction. When she is not writing about elopements, she writes grants for her research and non-profit work.
Previous PostNext Post
Let’s Chat

Amazing! Please follow this link to learn more about our elopement packages. If you're interested in booking one or want to learn more, just click the "Start Planning" button on that page or "Get a Quote" in the top right corner of your browser.